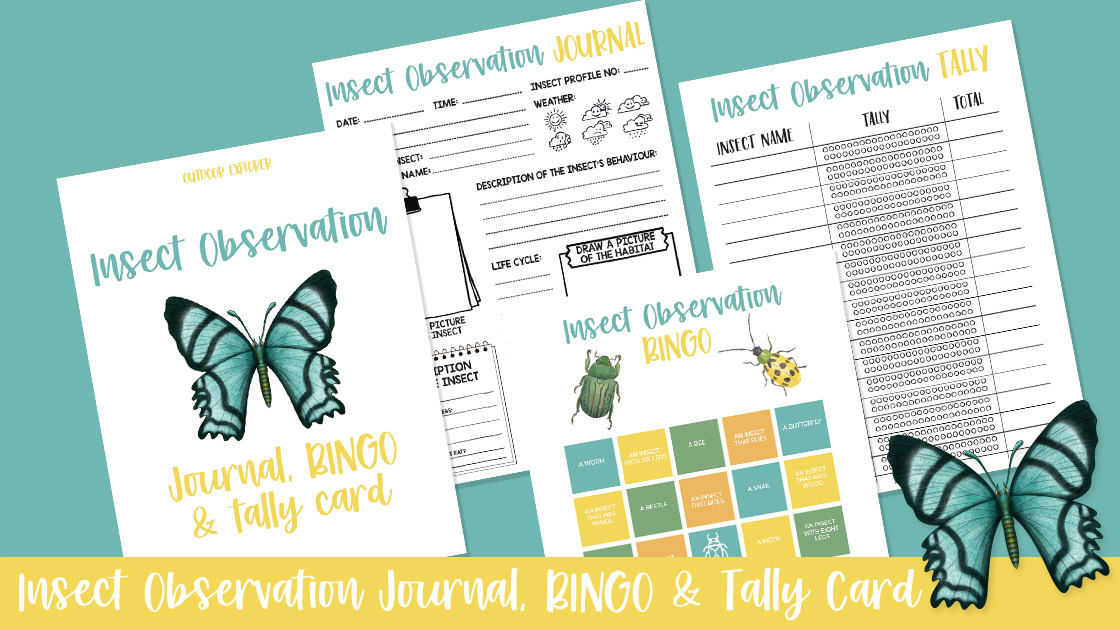 Learning all about insects for kids – of all ages! Download the free Insect Observation Journal at the bottom of this post too.

Kids discover bugs and insects from an early age. Toddlers will spot a worm sliding through the mud or a ladybug landing on their shoulder. With so many different kinds roaming about our planet, there’s no avoiding the cute, pesky little creatures!

Getting your family out in nature offers a perfect opportunity to teach them all they want to know about insects. Start with bugs native to your area, so you can spot them out in their natural habitat. You can also bring the learning inside, using the internet to research different categories of insects. There are thousands of kids books about insects available too!

Introduction to Learning about Insects for Kids

Insects are a very diverse and interesting group of animals. There are many different kinds, or groups, of insects; over one million species of bugs have been identified!

Here are some other quick facts on insects:

7 Common Insects in the United States

As you learn about the various bugs throughout the world, you will see there are so many to discover. The following is a list of the more common insects that your family may stumble upon while outdoors.

The beetle is one of the world’s oldest bugs. They are also the largest group of insects, with 400,000 species that have been discovered by scientists. Only about 12,000 species of beetles are found in the U.S.

Most beetles only live one year.

Ladybugs, fireflies, and lightning bugs are all considered beetles.

Adult beetles have two sets of wings and a hard shell to protect their bodies. The larvae of beetles are sometimes known as grubs, and they look like short, fat worms.

Some beetles are harmful, eating crops or wood. You will want to keep them out of your garden. Others are helpful, as they eat more dangerous insects or help pollinate flowers.

The ant is the longest living insect found in the world. Some queen ants can live up to 30 years. There are currently 12,000 species of ants found on the planet.

Ants live in large groups called colonies. Within the colony, the ants each have a specific job.

One female ant in the colony is the queen, and she lays eggs to grow the group. She is the only female in the colony with wings. Once the queen dies, the colony cannot survive more than a few months and they all die as well.

The larger females in the colony are soldier ants, defending the queen and colony from other colonies. Other female ants are worker ants, and they build hills and tunnels for the colony to live in. They also go out and find food.

The male ants in the colony also have wings,. They do not live long, and their sole job is to mate with the queen.

Ants can carry 20 times their weight, making them the strongest insects in relation to their size.

The fly is a very common insect for kids to find in and around their homes. They are found in all parts of the world, except Antarctica.

Flies have short life spans, and can lay hundreds of eggs at one time. There are more than 150,000 species of flies, with the house fly probably being the most common.

Unlike most winged insects, flies only have two wings. They also have sticky feet that help them land on virtually any surface. They can even walk upside down on the ceiling with no problem!

Adult flies do not have teeth so they survive on a liquid diet. They do have a tongue that looks like a straw. They land on food and vomit on it, dissolving the food so they can suck it up with their tongue.

Flies can be harmful as they spread diseases such as typhoid fever, dysentery, cholera and polio. They are also helpful in that they are a food source for many other animals like birds and frogs.

There are over 20,000 species of bees in the world. The most commonly known species in the United States are the honey bee and bumblebee.

Bees live in colonies similar to ants called hives. The queen is the only bee that lays eggs. Drone bees are the males that mate with the queen. The other females are the worker bees that keep the hive clean and protected as well as find nectar and pollen to feed the other bees.

The nectar collected by worker bees is also used to make honey. They use this to feed their young during the winter. Beekeepers have harvested honey from hives for over 4,000 years. They also collect the beeswax which is used to make candles.

Bees may sting you when the feel threatened. Only the female bees sting. The stinger, known as an ovipositor, is also used by the queen bee to help her lay eggs.

We rely on bees to help pollinate plants so that our flowers, fruits and veggies can grow. When a bee lands on plants collecting pollen, pollen from previous plants is left behind to create cross-pollination, a necessary action for all plants to thrive.

There are about 4,000 species of wasps found in the U.S. The most common is the paper wasp. It gets its name from the thin material it builds its nest with, it really looks like paper!

Wasps tend to be more active during the day, returning to their nests to sleep as the sun sets. They are most active in the late summer and early fall months, as they are preparing their nests with lots of food for the winter.

Wasps live in smaller colonies and hives than other insects for kids. The single queen lays eggs in the open cells of the nest. Other females work to build future nests, which are often constructed to hang in windows, doorways, porch ceilings, attic rafters, or railings.

Like bees, wasps sting as a way to protect themselves. Protect yourself while outdoors by keeping food covered. Also, use unscented hygiene products while hiking or camping, as sweet, fruity smells can attract wasps.

Cockroaches are some of the oldest bugs found on the planet. There are 3,500 species of cockroaches, but only about 30 live near humans like us.

They are very adaptable, which helps them live longer. Cockroaches can survive up to one month without food, two weeks without water, and one week without their head! They can also hold their breath for 30-40 minutes, allowing them to survive while submerged in water.

These bugs are fast; they can run up to 3 miles per hour when needed.

Cockroaches are well known for spreading germs and bacteria. They prefer to live in dark, damp environments like sewers or basements. They shed their skin, which can trigger allergies and asthma in children.

The butterfly is by far the most beautiful insect for kids to see in nature. Their four wings have unique patterns made with bright colors.

Most butterflies eat the nectar from flowers, and they taste with their front feet. Butterflies live between one week and one year, depending on the species.

You may have studied the life cycle of a butterfly in school. Butterflies have the same four stages in their lifecycle as other insects: egg, larva (caterpillar), pupa (chrysalis, or cocoon) and adult (butterfly). The Very Hungry Caterpillar by Eric Carle is a great book to teach a butterfly’s life cycle to preschoolers!

A butterfly’s wings are made of tiny scales which they will shed regularly through their life. If you touch a butterfly’s wing, you’ll feel dust on your finger. This is actually scales. You shouldn’t try to touch their wings, though, as it can damage them and make it difficult or impossible for the insect to fly.

There are many insects for kids books available in the library or on Amazon. You can find books for certain bugs or reference guides for several insects. Weave these books into your homeschool or classroom.

It can also be fun for families to read these books together to learn more about the bugs around your home! 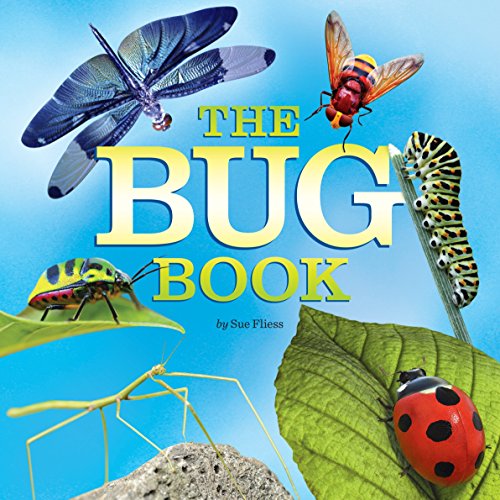 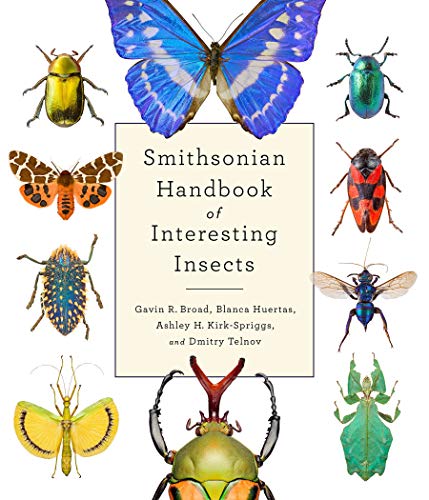 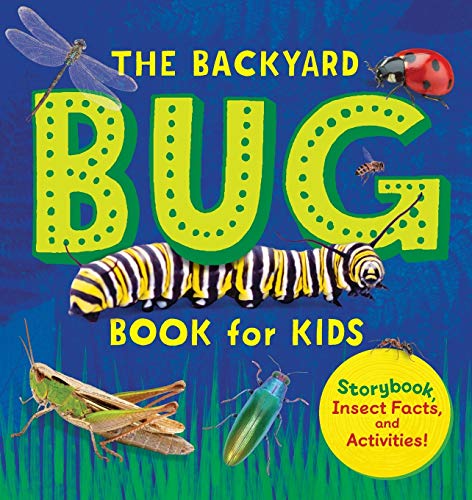 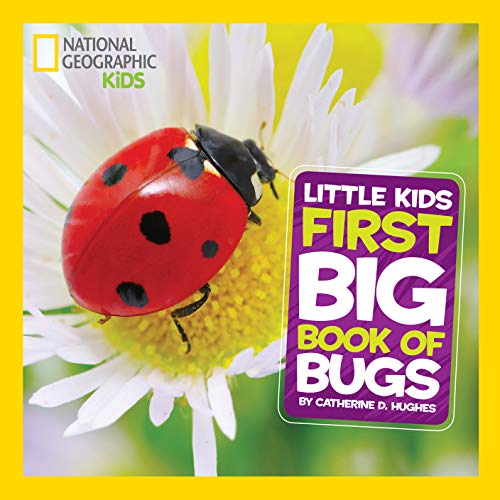 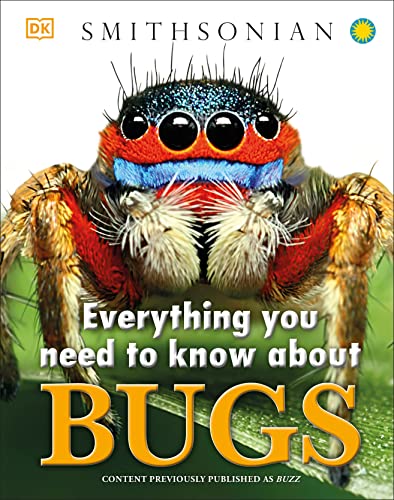 Everything You Need to Know About Bugs 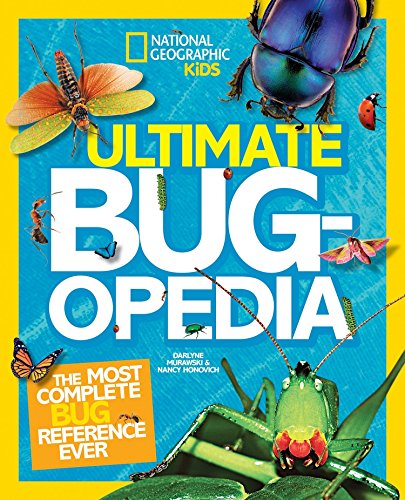 This journal comes with a log sheet that lets you include information about each insect, including life cycle, habitat, and physical description. You can also jot down the date, time, and weather conditions of when you found each bug – in case you’d like to find more!

The Insect Tally Card lets you record how many of each bug you find. You can see how many are native to your area with this info.

FAMILYINNATURE.COM IS A PARTICIPANT IN THE AMAZON SERVICES LLC ASSOCIATES PROGRAM, AN AFFILIATE ADVERTISING PROGRAM DESIGNED TO PROVIDE A MEANS FOR US TO EARN FEES BY LINKING TO AMAZON.COM AND AFFILIATED SITES. SOME OF THE LINKS IN OUR POSTS ARE AFFILIATE LINKS. AT NO COST TO YOU, WE WILL EARN A SMALL COMMISSION IF YOU PURCHASE THROUGH OUR AFFILIATE LINKS. PLEASE KNOW THAT WE ONLY RECOMMEND PRODUCTS THAT WE USE/KNOW ARE HELPFUL TO FAMILIES WISHING TO ENJOY NATURE LIKE WE DO.

We use cookies on our website to give you the most relevant experience by remembering your preferences and repeat visits. By clicking “Accept”, you consent to the use of ALL the cookies.
Cookie settingsACCEPT
Manage consent

This website uses cookies to improve your experience while you navigate through the website. Out of these, the cookies that are categorized as necessary are stored on your browser as they are essential for the working of basic functionalities of the website. We also use third-party cookies that help us analyze and understand how you use this website. These cookies will be stored in your browser only with your consent. You also have the option to opt-out of these cookies. But opting out of some of these cookies may affect your browsing experience.
Necessary Always Enabled
Necessary cookies are absolutely essential for the website to function properly. These cookies ensure basic functionalities and security features of the website, anonymously.
Functional
Functional cookies help to perform certain functionalities like sharing the content of the website on social media platforms, collect feedbacks, and other third-party features.
Performance
Performance cookies are used to understand and analyze the key performance indexes of the website which helps in delivering a better user experience for the visitors.
Analytics
Analytical cookies are used to understand how visitors interact with the website. These cookies help provide information on metrics the number of visitors, bounce rate, traffic source, etc.
Advertisement
Advertisement cookies are used to provide visitors with relevant ads and marketing campaigns. These cookies track visitors across websites and collect information to provide customized ads.
Others
Other uncategorized cookies are those that are being analyzed and have not been classified into a category as yet.
SAVE & ACCEPT